100 promises delivered along with hopes of a new beginning.

Chief Minister of Kerala Shri Pinarayi Vijayan has handed over keys of the 100th house built by Aster Volunteers, to rehabilitate the flood victims of 2018 at an event held at Kochi Municipal Corporation Town Hall. This marks the completion of the first set of handovers out of the 250 Aster Homes which was announced as a part of the Rebuild Kerala initiative to help thousands of people who lost everything they possessed. Speaking on the occasion, Pinarayi Vijayan, commented that Aster Group has set an example for others with the initiatives taken by it in the area of social services. He added that as Dr. Azad Moopen is a philanthropic businessman such initiatives have received an added advantage. He also lauded the role played by Aster Volunteers in the flood rescue activities.

Terrace Gardening in the UAE

Under the efforts of Aster Volunteers Green Canopy, there has been a total harvest of over 30 kgs of vegetables and herbs like tomato, chilli, coriander, lettuce etc. The endeavor was made possible

Aster Volunteers UAE in association with Dubai Municipality and Abu Dhabi 4*4 arranged a desert clean-up drive in the interior of Al Badayer Desert. In just 3 hours, a humongous quantity of camping

Meet Aishwarya Krishna, a student of psychology from Deakins University, Australia. She has volunteered for one event with Aster Volunteers, but was so inspired that she has resolved to keep giving back to the community whenever she can.

Manoj is a Learning & Development executive, who was inspired to take up volunteering by the promise of helping someone out selflessly and because he was curious about seeing life from the perspective of those who need help the most.

Passion is at the heart of volunteering says student volunteer Darshan. It’s not about how you feel, rather about how you make others feel. He is one of our oldest members, offering his time right from when Aster Volunteers was established.

Poornima is a senior executive who has been following the various events conducted by Aster Volunteers closely and hoping that the platform would open up to external volunteers from outside of the Aster organisation.

A fourth year student at Gulf Medical University, Nitha has always wanted to participate in volunteering events to serve the community. The opportunity to help those less fortunate than her has made her less self-centred and more aware of the blessings in her own life.

Taking inspiration from the courage and dedication of Aster Volunteers, Rana decided to become one herself. She feels blessed for the privilege to help people around her who may be struggling.

A senior software developer working for Nokia Networks in Bangalore, Sagar has wholeheartedly participated in various initiatives with Aster Volunteers. From providing computer and English coaching lessons to underprivileged children to actively volunteering in the Aid Kerala mission, there's no stopping Sagar.

A senior marketing and business development executive by profession, Azza believes in the ancient wisdom of the proverb “A selfless act is an eternal act”. She has been an Aster Volunteer for 1.5 years and is grateful for the opportunity to help many through the platform.

Azif Abdul Rahman has been volunteering with Aster for over 3 years. An internal audit professional, he made a conscious decision to spend less time on Facebook and YouTube and instead dedicate his free time towards doing good.

Ebtsam is an insurance clerk who has been volunteering for 1 year with Aster. It has helped her discover the unconditional joy a few small actions from her can bring out in the life of others. To her, this is a feeling beyond happiness

There is no greater privilege than being able to help someone in need, says Abhijit Gavali. A doctor by profession, he began working at an Aster Adhar Hospital in Kolhapur and has participated in various Aster Volunteers programmes.

Manjushree is a clinical counsellor and academic coordinator. When she began getting actively involved with Aster Volunteers activities, she discovered the potential of contributing to her community.

Ayesha has been a part of Aster Volunteer initiatives since 2013. She works in an administerial position as a manager and her involvement with Aster Volunteers helps her deal with stress by giving her a sense of fulfilment.

Padmakumar Smaraharan has been actively involved in a wide number of initiatives started by Aster Volunteers during the Covid-19 crisis. He lent his efforts at the screening camp at Al Quose and has distributed food kits and gift boxes at various locations. He is eager to continue giving back to society.

From Al Karama, Dubai, Arifa Hassan was able to participate in a blood donation camp held by Aster Volunteers. During her time volunteering, she learned how better to coordinate with a team of people.

This coordinator from Sharjah volunteered for distributing food kits to people nearby. He enjoyed the experience of volunteering and the joy of helping others.

Being present at the Covid-19 screening camps and distributing food kits as well, Sunanda Jayakumar is undoubtedly a brave volunteer. She was able to help several people in Burdubai and learned how selflessness can go a long way.

Even though Rahees Adamkutty is new to volunteering, he was able to help in Aster Volunteers’ Covid-19 Ramadan relief initiatives and provide tele counselling services as well. He helped many who are suffering during this pandemic.

From collecting blood samples to distributing food, Abdul Muthalib Arayalan has been an indispensable member of the community during the pandemic. He has been able to change many lives with his tireless efforts.

Abdul Shabad Hakeem volunteered for the medical camp and food distribution initiatives in Mankhool. Volunteering has been an interesting experience for him since he not only learned something new every day but also made friends.

Having participated in various Covid-19 relief activities like food and gift distribution and responding to distress calls, Kishore Sudhakaran learned a lot about responsibility. It also gave him immense joy to be able to give back to his community in Sharjah during the pandemic.

Sarfras Navas was involved with distributing of food kits and a blood donation camp in Rashidiya. He expressed satisfaction in lending helping hand and in turn, being a hero to someone in times of need. He is also grateful for meeting people he would not have gotten the chance to interact with, if not for the volunteering experience.

The Covid-19 Ramadan initiatives were the focus of Sreehari Vidhyal’s volunteering endeavours. He expressed how working with Aster Volunteers was a satisfying and special experience.

By delivering food kits and verifying people at screening camps, Muhammed Rifas was able to build a sense of commitment and responsibility to society. This also makes him feel self-satisfied and hopeful.

Shareef Kabeer had a great experience distributing food kits and volunteering during the Covid-19 crisis. He also felt the joy in giving and helping people around him. 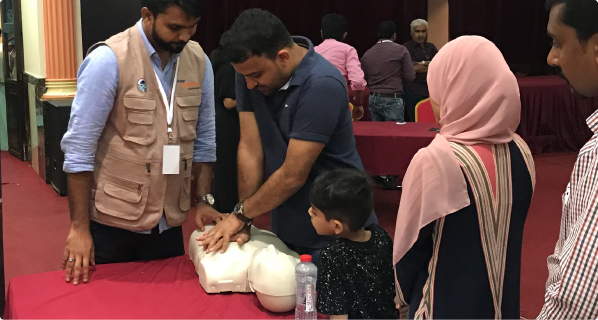 Conduct a BLS Training
in your institution Want a Mobile Medical Clinic
to visit your area?

Reach Us
About Us
Become An Aster Volunteer